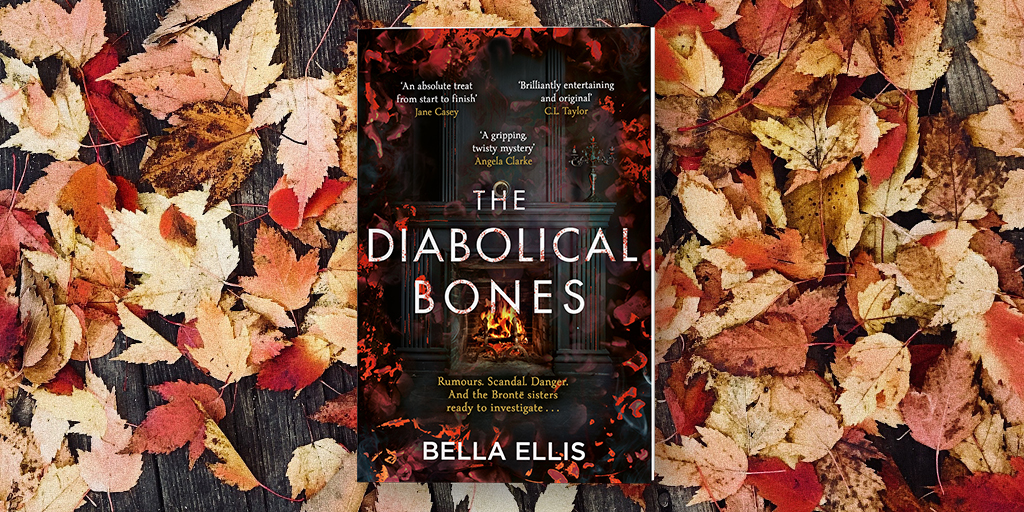 THE DIABOLICAL BONES by Bella Ellis is out now in paperback!

It’s Christmas 1845 and Haworth is in the grip of a freezing winter.

Charlotte, Emily and Anne Brontë are rather losing interest in detecting until they hear of a shocking discovery: the bones of a child have been found interred within the walls of a local house, Top Withens Hall, home to the scandalous and brutish Bradshaw family.

When the sisters set off to find out more, they are confronted with an increasingly complex and sinister case, which leads them into the dark world of orphanages, and onto the trail of other lost, and likely murdered children. After another local boy goes missing, Charlotte, Emily and Anne vow to find him before it’s too late.

But in order to do so, they must face their most despicable and wicked adversary yet – one that would not hesitate to cause them the gravest of harm . . .

Charlotte could not conceive of a place more beautiful than Haworth and the surrounding countryside in the spring.

The trees were heavy with blossom, the moors green and fecund with new heather, still tender and soft underfoot, dotted with the little white clouds of cotton grass that danced in the brisk breeze. And yet, as much as Charlotte was glad to be at home, recovering after a long illness and with nothing but time and the freedom to write, it could not be denied that even now, all these long months later, months filled with travel and acclaim, she felt trapped: a prisoner of isolation. Still, even with the trips to London, the company of Thackeray, Mrs Gaskell and, yes, dearest George Smith, she felt always as if a part of her heart were missing. No, that wasn’t quite right: as if three-quarters of her heart were missing, each one taken on to heaven before her by her late brother and sisters. If only some miracle could return them home to her, then perhaps she could laugh more, perhaps she could love more and, most important, perhaps she could write more. Indeed, there were some long, stormy days and nights when she felt such a craving for support and companionship as she could not truly express. It was as if her loneliness were whittling away a little bit of her, day by day. When the prospect of marriage, of being loved, had come to her, in the form of Mr James Taylor, all she had felt was ice in her veins.

With the playful wind cooling her cheeks, Charlotte walked on, her mind wandering so far from her route that it was with some surprise that she stopped outside the highest dwelling on the moor, Top Withens Hall. She paused for a while, even now a little reluctant to draw nearer to the cold grey edifice that looked more like a haunted ruin than a busy home and farmhouse.

Top Withens’s gargoyle sentinels looked down on her just as fiercely now as they had on that dark afternoon. Was it really six years since the bitter Christmas when Charlotte, Emily and Anne had trudged through the snow to this very gate, unaware of the hidden horror that lay beyond? Despite the mild sunny afternoon, Charlotte shuddered at the memory; she had never forgotten what it felt like to stand in the presence of unadulterated evil.

And yet for all the fear and misadventures the three of them had endured in the pursuit of truth, at least she had had her family around her. Even in the darkest moments of her life, it had been her brother and sisters who had given her strength. Take courage’: those had been Anne’s last words to her, and take courage she must, for there was no alternative but to continue. Charlotte took one more long look at Top Withens, searching for any remaining traces of the infestation of wickedness that had once thrived here, but to her relief, she could find none. These days Top Withens was a quiet house occupied by a quiet and decent family man.

But in December of 1845, things had been very different.

The scream ripped through the frozen air, sharp as a knife.

Liston Bradshaw sat bolt upright in bed, his quick breaths misting in the freezing air. Outside a snowstorm raged, and the wind tore around Top Withens Hall, imprisoning it in a howling, furious vortex of noise. When the dreadful cry sounded for the second time, Liston stumbled out of bed, dragging on his breeches and shoving his bare feet into his boots. Careering down the stairs into the hall, he heard his father’s violent shouts.

‘Begone with you, demon, begone!’ Clifton Bradshaw railed at thin air. Liston arrived to see his father swivelling this way and that, a rusty old sword from above the fireplace in his hand, as he jabbed at and threatened empty spaces. His eyes were wild with fright and red with drink. The hounds barked madly at his side, cowering and snarling in turn from some
nvisible threat. ‘Show yourself, and let me fight you!’

‘What is it, Pa?’ Liston asked as the latest scream died away, and he searched out every dark corner for the phantom intruder. ‘Why are we cursed so?’
‘I’m mortal afraid that she has come back to claim my soul,’ Clifton told his son, his voice trembling.
‘Who? Is there someone outside?’ Liston went to the door, grabbing a poker from the fireplace.
‘There’s no one outside, fool,’ Bradshaw spat. ‘This fury comes from within the house. It comes to take revenge.’

When the wailing came again, it was heavy with a piercing, plaintive sorrow that soaked the very air in grief. His father was right. There was no mistaking it: the cries were coming from the oldest part of the house, from the rooms that his father had shut up on the day Liston’s mother died, and none had set foot in them since.

‘Mary.’ Bradshaw’s face crumpled as he spoke his dead wife’s name aloud, dragging the sword across the stone flags.
‘Mary, why do you hate me so? Please, I beg you. Tell me what you want from me!’
‘Pa?’ Liston called after him uncertainly.
‘Are you coming, or will you be a milksop all your life?’ Liston swallowed his misgivings and followed his father into the perfect dark.

The dull jangle of heavy keys, the clunk of the stiff lock opening and the creak of the old door echoed in the night, and Liston held his breath. His mother’s mausoleum had been unlocked.
The rush of air that greeted them was stiff with ice.
Liston shuddered as he stepped over the threshold into the old house. Thirteen years since his mother had gone to God.
Thirteen years since his father had shut off these rooms, keeping the only key on his belt at all times, even when he slept. In all that time there had been no fire in the grate, not even a candle lit at the window.

It was as cold and silent as the grave.

‘Mary?’ Liston was stunned to hear his father’s voice thick with raw and bloody sorrow. ‘Mary, is it you? Are you coming back to me, my darling? Mary, answer me!’
As they entered what had once been his mother’s bedchamber, it was as if time stopped. The storm quietened in an instant, and suddenly every corner was lit up by the full moon, almost as bright as day. The ancient box bed crouched in the corner as if it might pounce at any moment. The few things that his mother had owned were still laid out on the dressing table and a howling wind swept in through a shattered window,  leaving jagged, frosted shards glinting in the moonlight.

What had happened here?
Bradshaw fell to his knees on the dust-covered floor, tearing at his hair. ‘Mary, I’m here. Come back to me, I beg you. Please, please, tell me you forgive me.’
For the space of one sharp inward breath, there was silence.

Then the screaming began again, so loud that Liston felt for a moment it was coming from within him. Furiously his father grabbed the poker from him and dug it into the gaps of the drystone chimney breast, forcing out one stone and then another. Dropping the poker, he frantically began to pull the loose stones out, until, at last, a great cascade of them tumbled onto the floor, making the rotten boards tremble.

The shrieking stopped as if cut short by a smothering hand. Warily Liston took a step closer to see what his father was staring at. There, tucked into a sooty alcove more than halfway up the chimney, was something bundled and bound into a blackened cloth parcel of considerable size.

‘Fetch it down, then,’ his father commanded him, and though he felt a sense of dread in his gut unlike any he had ever known, Liston obeyed his father. Though it was large, the parcel was light as a feather, shifting in his arms. As he laid it down, all the fear Liston felt drained suddenly away, and he was left only with horror.
‘Out of my way.’ Bradshaw elbowed his son to one side, taking the knife from his belt, slicing through the bindings and revealing to the night what had been hidden within.
‘Dear God in Heaven, deliver us from evil,’ Liston whispered as he fell back on his heels at the sight.
‘I’d say that God was nowhere to be found when this occurred,’ his father replied.

For contained within the desiccated cloth were the skull and bones of a child.

Read an exclusive extract from The Furies by John Connolly

Bombay’s The Divine Comedy: Murder and the Manuscript 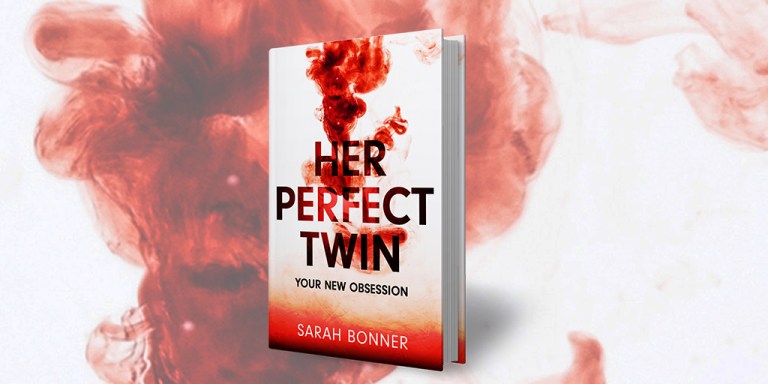