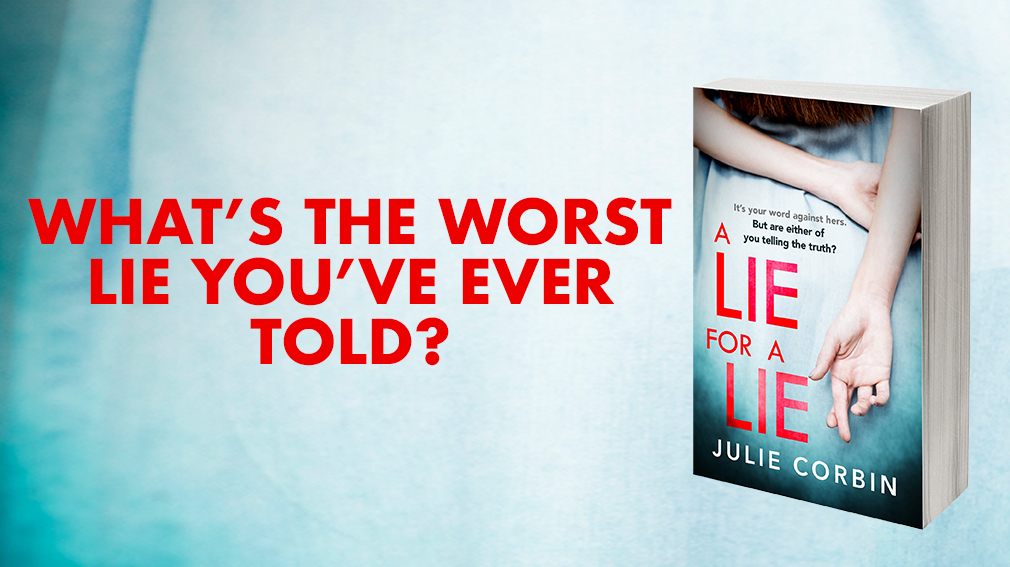 I tell a lie – it’s the wrong lie.
I choose it without thinking about the consequences.

And I get much more than I bargained for. Serves me right?
You be the judge.

It begins with a phone call from the headmaster’s secretary. ‘Mr Wiseman would like a word.’

‘Did he mention a time?’ Anna asks, phone in one hand, bloody gauze swab in the other.

‘Immediately,’ she tells her. ‘That’s what he said. Ask Sister Pierce to come and see me at once.’

‘Okay.’ Anna glances at the boy on the examination bed: Angus Rutherford, sent up from the pitches after colliding with a classmate. ‘I’ll finish up here and come straight across.’ She returns the phone to its cradle and takes a closer look at the cut on Angus’s head. She feels around the wound and pulls the skin together before holding the edges in place with wound closures that are almost immediately soaked in blood. ‘This needs to be stitched.’

‘Will I have to go to hospital?’ Angus asks. He is a gentle boy who becomes a tiger when he plays sport; it’s not the first time Anna has had to patch him up.

‘I’m afraid so.’ She wraps a dressing bandage around his head from the base of his skull to just above his eyes. ‘Tell me if it’s too tight.’

‘Will I be able to play on Saturday?’
‘No contact for at least three weeks, possibly more.’ His whole body slumps. ‘Sir will go nuts.’
Anna soaks a cloth in hot water and wipes away the blood drying in patches on his cheek. ‘It’s just one of those things, Angus,’ she says. ‘Happens to all the best players.’ She removes her gloves and drops them into the bin. ‘I know it’s upsetting but at least you don’t have a serious concussion or you could be out for the whole season.’ She helps him off the surgery bed. ‘Have a seat in the waiting room and I’ll ask Nurse Whitlock to organise your trip to hospital.’

He hobbles towards the door, his hand resting protectively on the head bandage. He’s almost over the threshold when he looks back and says, ‘Thank you, Sister Pierce.’

‘You’re welcome.’ She smiles, feels it fix on her face as she breathes in. She holds the air in her lungs for a few seconds and allows herself to think about why the head wants to see her. She’s known Owen Wiseman for almost two decades. They sing in the same choir and have children of similar ages, but she rarely speaks to him about work. Owen normally stays out of the day-to-day running of the school. He’s more concerned with pupil numbers and budgets, governors meetings and child safeguarding.

It must be something serious otherwise he would catch her when their paths crossed in the corridor or at choir practice.

She goes to find Geraldine Whitlock, who is standing in front of the whiteboard in the office planning the HPV vaccination schedule. Her list of names is written in small, neat handwriting with arrows and asterisks in contrasting colours; woe betide anyone who messes with her system.

Anna tells her about Angus, and then, ‘Owen’s asked to see me. Hopefully I won’t be long.’

Geraldine gives an audible sigh. She’s close to retirement and by her own admission has had enough of increasingly demanding parents and antisocial shift work.

Geraldine nods acceptance and Anna leaves her to it, knowing full well that if any children do appear they won’t linger if they see Nurse Whitlock’s on duty. Short shrift is her prescription for most things.

Anna shields her eyes as she comes out into the late September sunshine. The sky is a wispy blend of blue and white, and a welcome breeze blows up from the coast. The medical centre sits at the western edge of the school campus, close to the playing fields and the boarding houses, and more than one hundred metres from the clutch of buildings that make up the main school. She walks up the hill, passes the pre-prep and nursery on her left, and the chapel on her right, the latter a grand building, more cathedral than chapel.

The head’s study is on the far side of the lower quad, in the main building, which was originally a twelfth- century monastery. She takes a short cut through a concealed door off the quad into the oak-panelled hall then up the stairs to the waiting area outside his office. His secretary glances up at her but doesn’t smile. Anna doesn’t take it personally; she rarely smiles. ‘He’s on a call with one of the governors,’ she says. ‘Have a seat. He shouldn’t be long.’

Anna sits on the plush sofa opposite the window. ‘Do you know why he wants to see me?’ she asks.

‘He requested the minutes from the pastoral care meeting,’ his secretary tells her. ‘Might be something to do with that.’

Thursdays always begin with the pastoral care meeting, three of them gathered in the deputy head’s study: Anna, Lynn Sykes, head of pastoral care, and Peter Williams, the deputy headmaster. That morning they discussed the children they were concerned about – a bereaved child in Year Five, a child who was suspended after he was caught smoking, another child, and another, until ‘Victoria Carmichael,’ Peter said, looking at Lynn. ‘You wanted to flag her up?’

‘She’s made a poor start to this term. We’re only a few weeks in and she’s already been in trouble half a dozen times or more. Last week she was in Saturday detention but almost immediately afterwards was caught stealing another girl’s make-up.’

Lynn and Peter discussed her lack of focus and questioned whether her home life had worsened but Anna didn’t comment. She should have, she realises as she sits outside the head’s office, because she has a feeling that this is the reason she’s been called in. She’s also worried about Victoria – Tori as she’s mostly called – but she didn’t add to her colleagues’ comments because she felt enough was said and, anyway, her concern has been minuted on many previous occasions.

Now she’s wondering whether she has made an error of judgement.

The door opens and Owen glances out. ‘Anna.’ He waves her inside his study and towards a seat. ‘Thank you for coming across.’

‘No problem.’ She sits down in front of his desk and watches as he removes his jacket before taking his seat opposite her. She thinks he might mention the piece they’re singing for choir this term – Bach’s Mass in B minor, an ambitious piece that’s challenging all their voices – or the fact that both their sons are in their first year at the University of Glasgow studying engineering.

He doesn’t. ‘I’ll get straight to the point.’ He rests his elbows on the desk. ‘It’s about Victoria Carmichael.’

He pauses and Anna senses him trying to read her expression. Anxious about what’s to follow, she says, ‘I did wonder if she was the reason you’d asked to see me. I know I didn’t raise any concerns at the meeting this morning. I should have,’ she acknowledges. ‘But I felt Lynn and Peter were thorough in what they said.’

‘What should you have raised?’ he asks, his tone interested.

‘Well … I’m also concerned about Tori. She’s been difficult with me lately, didn’t show up for our mentor’s meeting last week, was ten minutes late for my SRE lesson.’ She rocks forward in her seat. ‘And she’s been visiting the medical centre more than she normally would. She was upset yesterday afternoon when I wouldn’t put her off swimming.’ She feels a tremor begin in her thighs and she crosses her legs to smother it. ‘She is okay, isn’t she? She hasn’t hurt herself or anything? Please tell me she hasn’t?’

Owen understands where her thoughts are headed. ‘No, no.’ He shakes his head. ‘She’s not hurt herself. That’s not why you’re here.’

Anna lets out a sigh of relief. ‘Thank God! I was beginning to really worry.’ She’s spent her whole career caring for children and it would be her worst nightmare if anything were to happen to one of them. ‘Thank God,’ she repeats, shaking her head against the horror of it.

‘So she visited the medical centre when you were on duty yesterday?’

‘Yes.’
‘Did you write an account of her visit?’
‘I did. As I do with every child who steps through the door.’
He pushes his laptop across the desk towards her.

‘Could you show me the entry, please?’

She logs herself onto the system and quickly accesses the medical files, an area closed to all staff members apart from the four registered nurses. She clicks on Victoria’s file and then on the last entry: 24-09-19, 14.35. She turns the screen round so that Owen is able to see it. ‘There’s nothing confidential in this entry,’ she says.

He reads aloud: ‘Victoria wanted to be excused from swimming. I asked her why and she said, “Because I can’t be arsed.” I explained that this wasn’t a valid reason, that she was timetabled for swimming club and that with a positive attitude she might even enjoy it. She then told me it irritated her eczema. (She has never been diagnosed with eczema.) I asked her if she wanted to show me her skin but she told me it was none of my business. I suggested she speak with Mr Groom re swimming, as she had in fact signed up for the club. She told me she didn’t like him. I asked her if she wanted me to speak to him and she said no. I then asked her if there was anything else I could help her with and she said, “There’s no point. You’re as much use as a chocolate fireguard.” She left the surgery. I will catch up with her at supper to make sure she’s in a better frame of mind. Anna Pierce.’ He glances up from the screen. ‘Did you catch up with her at supper?’

‘I saw her but didn’t speak to her. She was sitting with Pippa, Hester and Isobel.’

Tori barely ate anything at supper. The email from her dad was burning a hole in her pocket. She glanced around the room, her eyes searching for Sister Pierce, but she couldn’t see her. And there was no one else for her to talk to. The girls were making it obvious they didn’t want her around. ‘You need to stop stealing,’ Isobel told her. ‘How many chances do we have to give you?’

‘I didn’t steal your make-up, Hester,’ she said.

The three girls looked at one another, eyes rolling, faces hardening.

‘And she didn’t visit you again later that evening?’

‘Not exactly.’ Anna explained she was busy after supper because the mother of one of the junior girls had come to her for advice. Her daughter was off sick but she had bundled her into the car when she came to pick up her son. A day child, so strictly speaking not Anna’s responsibility, but she had a raging fever and the beginnings of a rash. Anna took one look at her and immediately called an ambulance. ‘While I was on the phone, Tori was in the waiting room but she could see I was busy. We didn’t speak.’
Owen sits back in his seat and gives an audible sigh.

‘Anna, there’s no easy way to say this.’ He clears his throat, clearly reluctant to voice the words. ‘Victoria has accused you of assault.’

A Lie For a Lie publishes in ebook and paperback on 15th October 2020.