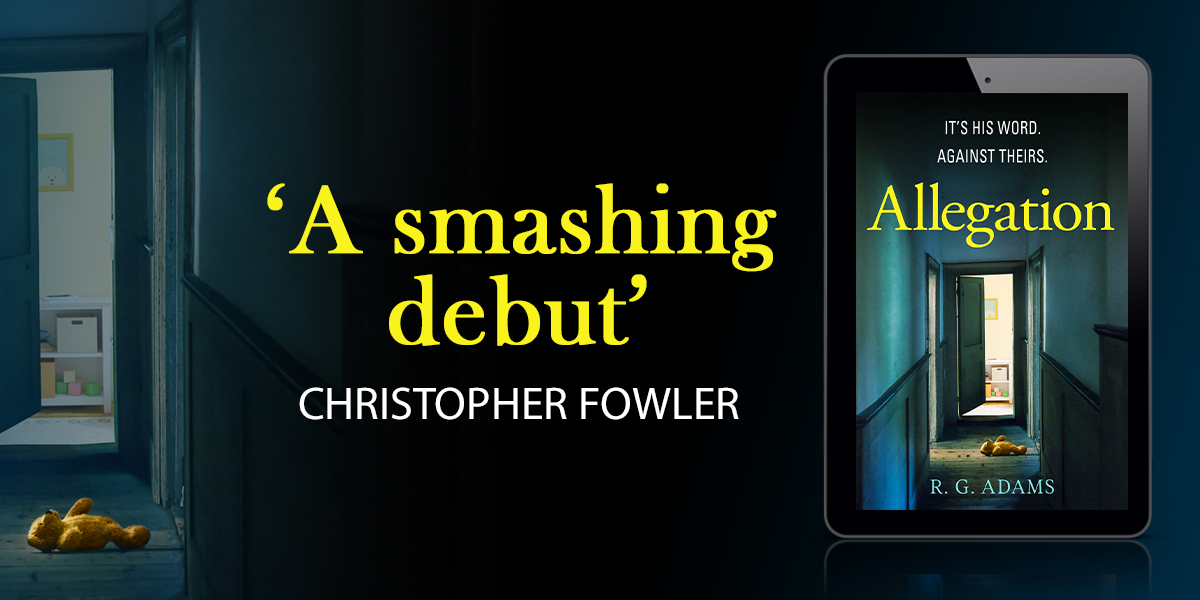 An evil monster exposed? Or an innocent life destroyed?

Social worker Kit Goddard is in over her head when she is handed her first high profile case. Start reading some of the first chapter below, and you can buy the ebook now.

Kit sat looking at the referral a while longer. Then she reached under her desk, slipped her feet into her white Converse, stood up and made for Vernon’s office.

‘Vern, can I have a word?’ Vernon was midway through a bacon bap. He motioned towards the chair in front of his desk with an oily finger.

‘Which one is that? You know what Mondays are like. I’ve had a shed-load across my desk this morning. What did I give you? The toddler with the suspected bite mark, was it?’

‘Ah, did you mean to give me that one? That would be fine.’

She’d seen plenty of bitten children, knew the drill with those.

‘No, it’s the Cooper family. It must have been a mistake. I don’t think I’m quite ready for that one yet, do you? Maybe Nazia could take it.’

Vernon held out his hand and Kit passed the referral to him with a sense of relief. Nazia was the most experienced social worker in the team and she handled all the high-risk cases.

Vernon had absolute trust in her. Kit watched as he scanned the referral, popping the last chunk of bread into his mouth.

When he handed the form back, it had grease marks on the edge. Kit took it from him gingerly. Vernon shoved a ball of bread and bacon over into his cheek so that he could speak.

‘Ah yes, I remember. Look, Kit, I know it’s a lot to ask. But Nazia’s just rung in sick, not expected back for at least three weeks. She’s dropped me right in it. I can’t send any of the others, they just wouldn’t handle something like this. It’ll be good experience for you, look at it that way. Those clowns in the Intake Team have done the screening right for once; they’ve already discussed it with the police and it’s definitely one for us. It needs an investigation and a full assessment. You’ve had enough time to get the hang of things. You need to start picking up some of the tricky stuff now.’

‘Tricky’s a bit of an understatement, isn’t it?’ Kit stayed in her chair while Vernon stood up and started towards the door.

He glanced back at her and, catching her expression, stopped in the doorway.
‘All right,’ he sighed. ‘If you’re really that worried, you could take someone with you, I suppose. Who have we got out there doing nothing today?’ He crossed to the door and leant out to look across the main office. ‘What about Maisie?’

‘No thank you very much. I’d sooner not.’

‘Yeah, all right, point taken. Might be safer without her. Useless bunch, aren’t they? Well, looks like you’re on your own then, kid. Now, I must love you and leave you. I’ve a hot date with Judge Peters.’ Vernon took his court jacket and tie from their permanent position on the back of his office door. The jacket had been hanging there for years and wouldn’t do up across his stomach. Kit wondered why he didn’t just buy a new
one and why Nell, a smart woman judging by the photo on Vernon’s desk, would allow her husband out in public looking like that. She watched as he tied his scraggy tie, then drew a battered plastic comb from his pocket and dragged it through his wiry grey hair, making no impression on it at all. Then he turned to leave.

‘Look, Kit, I have not got time for this. I’m already in for a hammering from Judge P. over that cock-up of Ricky’s, I can’t be late to court on top of that. I know this one’s looking like trouble. But try to treat them like any other family. They may be better off than we’re used to, nice house, et cetera, but all the usual applies to them, just like it does to everyone else. So, go and ring Dai Davies and find out what the police are planning for the dad. Then get on to Legal and get a letter drawn up. Get the parents in this week with their lawyer. Go from there. No, don’t bother with a gateway meeting,’ he said firmly, seeing Kit open her mouth and knowing that she was about to suggest just that. ‘I’m not having some agency manager who’s been here five minutes making the decisions on my cases. I’ve said that all along, so it’ll come as no surprise to anyone. Anyway, Mr and Mrs Cooper are obviously intelligent people so hopefully they will cooperate, in which case it will be straightforward enough. Make sure the kids are protected, get your assessment going, decide whether to take it to conference. That’s that.’

Vernon was trying to convince her, or maybe himself. Either way, he was trying too hard, and Kit wasn’t fooled. She couldn’t even begin to think about the bomb she was about to detonate into the heart of this family.

Vernon turned in the doorway again. ‘Actually, now I’m thinking about it, before you do all that, they’ve come up as known on the system, haven’t they? Seems one of the kiddies is disabled – Lucy, I think it is – so you’d better get downstairs and have a chat with that Jean Collins in Child Disability, see what she makes of the family. I wouldn’t expect much from her, judging by past experience, but it’s protocol and all that, OK?’

‘And don’t be put off by the Coopers, Kit. Don’t be intimidated.’

Only Vernon knew about her background. She hadn’t wanted it spread around the team, and he had promised to keep it to himself. But he had a knack of knowing when it was bothering her.

‘Good, so get going then. See what she’s got to say downstairs, pretend you care, then disregard every word of it and see for yourself, that’s my advice. Now I really have got to run.’

He headed across the team room and out of the door, shouting instructions to the duty social worker about a medical on an injured baby as he went.

After he’d gone, Kit gathered up her notebook and the referral for the Cooper children and went downstairs to find the Child Disability Team. She hoped she’d get a clue about how to handle things. Perhaps Jean Collins would even come out on a joint visit to the Coopers. Maybe Kit could drop quietly into the background and let her handle it. Vernon had been disparaging about Jean, but then Vernon viewed every team in the building as a soft option compared to his own. He thought the rest of the staff were simply people who couldn’t hack working on the front line. He wasn’t necessarily right about Jean Collins.

Kit arrived at the Child Disability Team and asked for Jean. The receptionist pointed towards a desk in the far corner. The woman sitting behind it gave a tight smile as Kit approached.

Jean was in her late forties and quite glamorous. Her hair was glossy and toffee-streaked, and her make-up immaculate. Kit was willing to bet that the luminous Jean didn’t feel out of place in the Coopers’ kitchen in Meadow View Crescent.

‘Hi, Jean. I’m Kit from the First Response Team. The Intake Team have had a referral from the police about one of your families. They’ve had a strategy discussion and agreed it needs to be investigated so it’s come through to us.’

Jean held out her hand for the referral. As she did so, Kit could see that Jean was looking downwards, taking in Kit’s Converse and her beaded anklets. In turn, Kit stared at Jean’s patent black high heels and her long fingernails, each one of which had a tiny white bow set dead centre in its pale pink lacquer. Kit wondered how anyone could be arsed to get bows put on their nails.

‘Oh, I am sorry, but this is just total rubbish!’ Jean jumped up, shoving her chair backwards. Her tone was furious. She waved the referral under Kit’s nose.

‘Which bit?’ Kit asked. Jean couldn’t have had time to read more than the first page.

‘All of it. It’s bloody nonsense. You are not seriously telling me you are going to go over there and ruin this . . . this lovely family on the basis of this . . . this . . . crap? They have a very seriously disabled daughter, you know, plus the two little ones.’ She sat back down and threw the referral onto the desk in front of Kit.

‘Yes, I do know, Jean, that’s why I’m here,’ Kit started. She felt that she was doing quite well so far, keeping her patience.

‘Vernon asked me to—’

‘Oh, yes, I might have known he had a hand in it. Well, you can tell Vernon Griffiths from me that there’s no need to bother going in there all gung-ho. I’m the case manager for this family and this can be NFA’d right now. Mr Cooper is marvellous with the oldest girl. He is a fantastic father and a very nice man. As if he would need to . . .’

‘I can tell you what this is,’ Jean continued. ‘It’s jumping on the bandwagon. End of.’

Kit could feel a burn forming in her stomach. She thought back to anger-management group and how she had learnt to breathe in and count to ten, and she tried to keep the heat down and not let it up into her throat. She seemed to remember something about becoming aware of the real reason behind your anger, but she found that the only reason that she could come up with was that Jean Collins was such an idiot.

‘No one’s saying he isn’t marvellous with his daughter, Jean. That’s not really the point, though, is it? It’s a historical sexual abuse allegation, it’s been referred to us and we need to make sure the children are safe and make a decision about conference and—’

‘Conference?’ Jean’s tone was rising. People at nearby desks were looking around to see what the commotion was. ‘You do know he’s a very successful accountant? The only reason they’re known to us at all is because they were unfortunate enough to have a child with severe cerebral palsy, and a very good job they do looking after her, Mr Cooper especially. He is totally committed to Lisa—’

‘Yes. Whatever.’ Jean was not deterred. ‘Conference? No. You are joking. He’d make mincemeat of you. This is not a family off a council estate, taking drugs and giving the baby Coca-Cola in its bottle. These people are well connected. They are capable of ending your career, and believe me, they won’t think twice about it.’

Keep reading… Allegation is out today!

An extract from Care For Me by Farah Cook 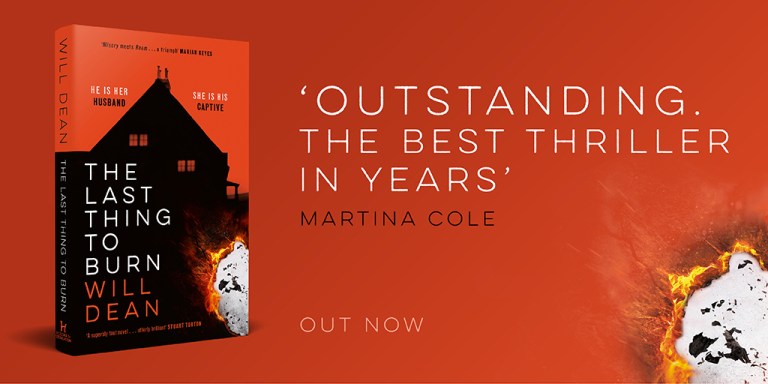 Who is Jude Lyon? Simon Conway introduces his protagonist in The Stranger