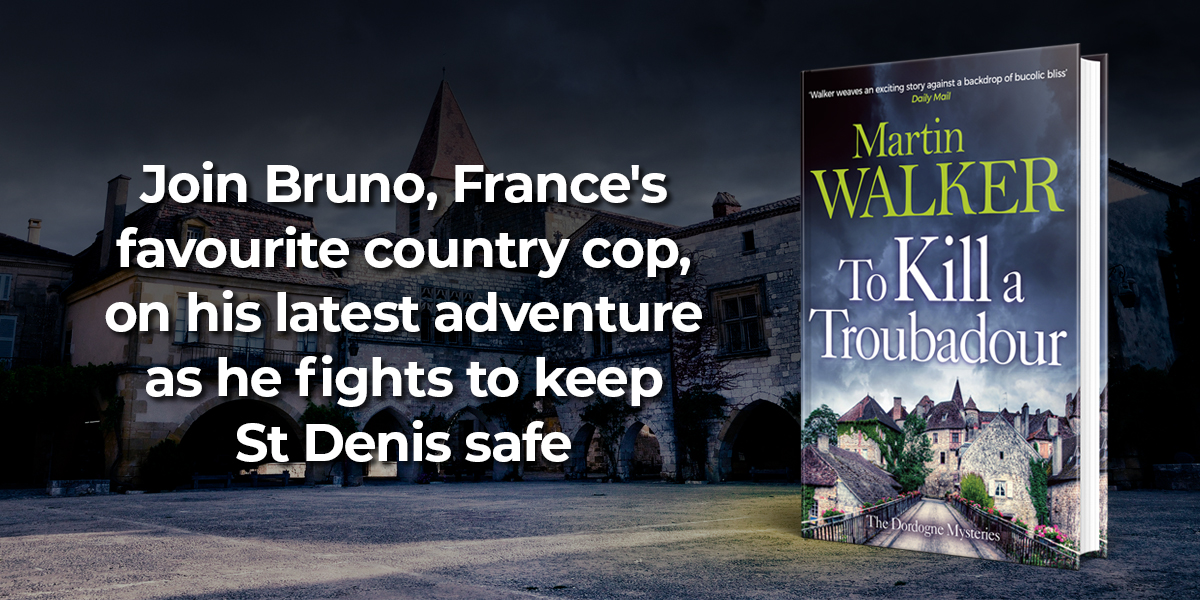 In anticipation of the publication of To Kill a Troubadour, we are delighted to share an extract from the book. This is book 15 in Martin Walker’s hugely popular Dordogne Mysteries series and readers can join Bruno, France’s favourite cop, on his latest adventures fighting to St Denis safe.

Bruno Courrèges, chief of police for the small French town of St Denis and for much of the Vézère valley, was taking a late evening patrol around the garden with his basset hound, Balzac, when the phone at his waist vibrated. Although it was nearly time for bed, once the screen showed that it was his friend J-J, head of detectives for the département of the Dordogne, Bruno thought he’d better answer.

‘You’re still up and about?’ came the familiar voice. ‘Good. I’ll be with you shortly. I want to show you something for you to tell me how worried I should be.’

Commissaire Jean-Jacques Jalipeau was a large and bustling bear of a man who had not been distracted from his duty when he was shot while making an arrest. Some called him a cop ‘of the old school’, in that he wore ill-fitting suits, smoked a pack of Gauloises a day, seldom polished his shoes and did not treat the media with the deference they had come to expect.

His prisoners did not fall ‘accidentally’ downstairs while handcuffed nor were their fingers caught in car doors. Female cops on his team almost never applied for transfers and he refused to play the usual turf wars with the gendarmes or to sneer at the municipal police.

Bruno went indoors to tidy his living room. He put out some glasses for drinks and checked the latest regional news on his phone for any clue to J-J’s unexpected visit. A few minutes later, the headlamps of J-J’s big Peugeot flared and Bruno went to the porch to welcome his friend. Josette, J-J’s driver and aide, reversed into the driveway and stepped nimbly out. J-J took more time to extricate himself from the passenger seat. He emerged carrying a small evidence bag.

‘Welcome, but it’s too late for coffee,’ said Bruno. ‘Tea, wine or something stronger?’

‘I’ll have a glass of your own vin de noix, since it has wine and eau de vie,’ said J-J, while Josette asked for mineral water.

Once installed in Bruno’s living room with their drinks, J-J tossed the bag towards Bruno.

‘You’re the military man with the Croix de Guerre,’ he began in his usual, abrupt way. ‘What can you tell me about that bullet, beyond the fact that it’s a 12.7 millimetre calibre and 108 millimetres long, with what look like Russian letters stamped into the base?’

Bruno managed to catch the bag without spilling his drink, surprised not only by the unexpected nature of J-J’s enquiry but also by his friend’s confident expectation that Bruno could answer all questions concerning war, weapons and the military in general. Then he recalled that it was many years since all young Frenchmen had been required to do at least a year of military service. By going to university and then enrolling in the police, J-J had been spared that. The tradition launched by the French revolution for every male citizen to be trained as a soldier and ready to fight for France had gone for good.

‘No, it hit a deer and then went into the ditch, lost the front wheel and killed the deer. No sign of the driver. We think there might have been a passenger. Two different brands of cigarette stubs in the ashtray. Though, of course, they could be old.’

‘A trained sniper wouldn’t leave stubs,’ Bruno said. ‘Was there anything else in the car?’

‘No bags, no papers, but one of the cops at the scene is a hunter and says he could smell traces of fresh gun oil on an old blanket. So the owner of the bullet might have had the weapon in the car with him. That’s what worries me,’ J-J said.

‘Putain, you tell me this thing can kill at over two kilometres?’

‘In the hands of a trained sharpshooter, yes.’ Bruno had seen armoured cars immobilized by a few of those heavy rounds.

‘Almost certainly he’d have to be military trained, and with the right kind of sights. Those guns should be carefully guarded but I imagine they could be picked up in war zones like Iraq, Afghanistan, Ukraine and Syria – anywhere where they used Soviet or Russian weapons. It’s entirely possible that such sniper rifles could get out into the illegal arms trade. There would certainly be a market for this kind of weapon.’

‘Yes, of course, but possibly they could have some criminal value in gangland, or they could be sold for serious money to passionate big game hunters of elephants and buffalo. And we can’t rule out the possibility of assassinations. I think you’d better contact the security guys, and maybe also the military police.’

‘What about the weapon itself, the gun that could have fired this bullet?’

‘There are different models,’ Bruno said. ‘But they’re all big, well over a metre long with a massive shoulder butt and special muzzle brakes at the end of the barrel to cut down the recoil. Without those muzzle brakes, you could never fire the big rounds without breaking the sniper’s shoulder. Mostly the sniper versions are single shot, bolt action, and always with
a bipod to hold it steady. Barrett make them in America and there’s a Canadian firm whose name I forget. In Russia, Kalashnikov and Dragunov both make them and then there’s Snipex in Ukraine, Zastava in Serbia—’

‘Putain, Bruno, where do you learn all this?’

‘Ever since I was shot, I’ve had a special interest,’ he replied.

‘When I was convalescing in the military hospital, the psychologists had the bright idea of bringing in one of our own snipers to talk to me about how I’d been shot. I’m glad they did. I stopped thinking about me and my wound and began thinking about the sniper, almost as an intellectual problem.’

‘There are machine gun versions, you say?’

‘Yes, it’s the classic Soviet air defence system: send up missiles to force the enemy aircraft low and then use massed machine guns to fill the sky with lead. The Iraqi Medina Division used them to break up an attack by American Apache helicopters, one of the few Iraqi successes of that war. And the Viet Cong used them to shoot down five US helicopters, and when the colonel flew in to see what had happened, they shot him down, too. But the machine gun versions need special reinforced mounts. They can’t be fired from the shoulder like a sniper rifle.’

‘Thanks, Bruno, I’ll keep you informed.’ J-J was standing up when Bruno interrupted him.

‘Before you go, there are some things you really have to know about this business, J-J,’ he said urgently. ‘Snipers like these never work alone. They need spotters. The sniper cannot afford to be lifting his head and staring around. He has to be remote, cool in his head, Zen. I’ve known some of these sniper guys and they are very special, somewhat mystical, almost religious. It is just them, their sights, their gun and their spotter. The target becomes practically irrelevant.’

‘Putain, Bruno, you sound almost romantic,’ J-J said after a moment, his voice not quite succeeding in making a joke of the remark.

‘Good, I think you’re starting to understand,’ said Bruno. ‘Then there are the sights. At the distances we’re talking about the sights have to be very powerful and calibrated to that particular weapon.’

‘Are they easy to find?’

‘For hunters, yes. But at extreme ranges you want some special sights that cost around three thousand euros. Look, J-J, you have a serious problem here. It would have to be a high value target, maybe even presidential level. And remember that snipers are accustomed to doing their job under extremely hostile conditions. If we can’t find them before they acquire their target and fire, we’ll have failed. It’s not easy to find someone who’s two or three kilometres away from the target before you even know the poor bastard is dead.’

‘Just what I needed, thanks,’ said J-J. He emptied his glass, rose and led Josette to the door. ‘Thanks for the drink and the insights. We’ll talk again tomorrow.’

Bruno stood in his garden beneath the stars, Balzac patiently sitting beside him, and watched the big car leave, thinking about the difference between him and his friend. Bruno had been through the military and J-J had not, and in that way he resembled most of the new generations of French people who were younger than Bruno. That was fine, and Bruno understood the idealism that lay behind the idea that the new Europe had grown beyond war. But the bright and peaceful new world that had followed the Cold War had changed, become darker, and brought back some of the old fears. It was not simply the new challenges of terrorism but the old and traditional forces of national ambition. As the new Russia flexed its military muscle and used new technologies to interfere in Western elections and to poison its social media, and used nerve agents to kill defectors in England, could Europe still hope to continue in its placid, pacifist ways?

Bruno thought of the emergent superpower of China and its blunt assertion of power in Hong Kong and Xinjiang, and of an America more focused on its domestic challenges than of the makeshift global peace and order it had sustained since the end of the Second World War. Could this great and lasting peace be maintained, or would future generations of Frenchmen, Germans, Britons and others have to gird themselves and train and mobilize to protect themselves and their people against hostile threats? The world, Bruno thought, was becoming dangerous again. 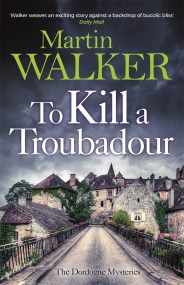 To Kill a Troubadour

Join Bruno, France's favourite country cop, on his latest adventure as he fights to keep St Denis safe. Set in the beautiful Périgord region, The Dordogne Mysteries are the perfect combination of mystery and escapism.

It is summer in St Denis and Bruno is busy organising the annual village concert. He's hired a local Périgord folk group, Les Troubadours, to perform their latest hit 'A Song for Catalonia'. But when the song unexpectedly goes viral, the Spanish government, clamping down on the Catalonian bid for independence, bans Les Troubadours from performing it.

The timing couldn't be worse, and Bruno finds himself under yet more pressure when a specialist sniper's bullet is found in a wrecked car near Bergerac. The car was reportedly stolen on the Spanish frontier and the Spanish government sends warning that a group of nationalist extremists may be planning an assassination in France. Bruno immediately suspects that Les Troubadours and their audience might be in danger.

Bruno must organise security and ensure that his beloved town and its people are safe - the stakes are high for France's favourite policeman.

Read an exclusive extract from The Furies by John Connolly