The realisation swells within him, like a birthing. It’s happening right now, today, in this moment of time, in this sliver of history. After months of gestation—after all the connections and the cultivations, all the plotting and the intrigues, all the threats and the blackmail — it’s this simple. He’s going to get away with it. The files are downloading, faster than he could ever have imagined, transcribing the guilt, the corruption, the criminality, all neatly packaged, all digitised, all pre-digested, pouring from the computer through a supposedly disabled USB port onto the bright blue thumb drive,
encryption broken, the truth laid bare, the drive itself hidden by nothing more than his bravado and a takeaway coffee cup. He stands and looks around, his mind electric but his exterior calm, the consummate actor. The consummate spy. He smiles—but, then, he is always smiling The trading floor is a hive of activity, brokers swarming, abuzz with corporate fervour and personal ambition, banks of monitors alive with bonds and equities and derivatives and exchange rates, all fluid, all flickering, all demanding their attention. Simply by standing still, he’s rendered himself invisible. No one is looking
at him, no one cares about his monitor, they’re all focused on their own ephemera: numbers and charts and transactions; losses, margins and gains. He feels he is the only point of stillness, the cyclone swirling about him, that he alone possesses the perspective to know what is truly happening across these epochal seconds. It completes his victory; carried out in plain sight, the audacity of it, his own subterfuge disguised by the bank’s own much larger
deception. It will make the retelling all the better; this will be the making of him, the stuff of legends. He catches a reflection of himself, only slightly distorted, in the surface of a golden wall panel. He’s pleased with what he sees: hair bouffant, face tanned, eyes bright and teeth even. He likes his face; everyone likes his face. It’s a likeable face. More importantly, it’s a trustworthy face.

The transfer is almost done. He lifts the coffee. It tastes excellent. Through the windows of the office tower, he can see the perfect Sydney day, blue and white, the sun pouring benevolence across the skyline, harbour alight, as if the city itself approves the righteousness of his actions. He looks back to the computer, startled to see it’s finished. Already. He blinks, savouring the moment, this tipping point, this culmination. If nothing else, he’ll miss the bank’s state-of-the-art tech, so much faster and efficient than the antiquated systems at his real workplace. He sits. Quickly, he imposes his own encryption
on the thumb drive, then runs a purpose-built program to cover his tracks. It takes mere minutes. Then he ejects the drive, pockets it and logs off. Done.

‘Early lunch?’ he asks, pausing at the cubicle of Raff, the shift supervisor—the one person he knows won’t accept his invitation. ‘Sorry. Bit under the pump,’ says Raff, not lifting his eyes from his screens. ‘Maybe later in the week.’

‘No worries,’ says Tarquin, grinning at his colleague’s predictability.

And Tarquin Molloy walks away, his gait confident, as always; his eyes shining, as always; his smile every bit as generous and unflappable as on his first day here. But inside, his stomach is churning and his mind is bubbling with what he has achieved. He enters the lift, hits the button for the lobby, for glory, taking one last look across the trading floor as the doors begin to close, the curtains falling on the final scene. He commits it to memory, for the recounting. Then, at the last, an arm reaches in, forcing the doors open. Tarquin Molloy beams at the newcomer, a tall man, thin and dressed in a vintage suit of coarse brown wool. The doors ease shut.

‘It certainly is,’ he replies. And to Tarquin, he does look like a gentleman. The suit is three-piece, of heavy cloth, as if it’s been transported from somewhere in the mid-twentieth century, immaculately maintained despite its age. There is a patterned kerchief in the suit’s breast pocket and a Legacy badge on its lapel. The man’s face is long, as is his hair, oiled so it stays in place behind his ears. The hair oil, or something, has a pleasant aroma in the confined space. The smell, like the suit and the man’s demeanour, is old-fashioned. His complexion is touched with sepia. A smoker, thinks Tarquin. Old for a trading floor.

‘Thank you,’ says the man genially. One of his teeth has a gold cap. ‘Hard to come by nowadays.’

The lift shudders to a halt, but the doors don’t open. They’re stuck between floors. ‘That’s strange,’ says Tarquin.

‘You don’t know the half of it,’ says the man in the brown suit. He unbuttons his coat and withdraws a revolver. A six-gun, a prop from a Western, a massive thing, matt black and menacing, its handle inlaid with pearl shell. Tarquin’s stomach plummets and his mind begins to reel. The muzzle is pointed at his chest. 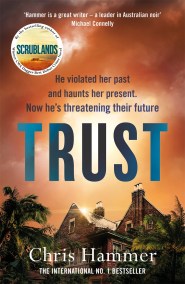