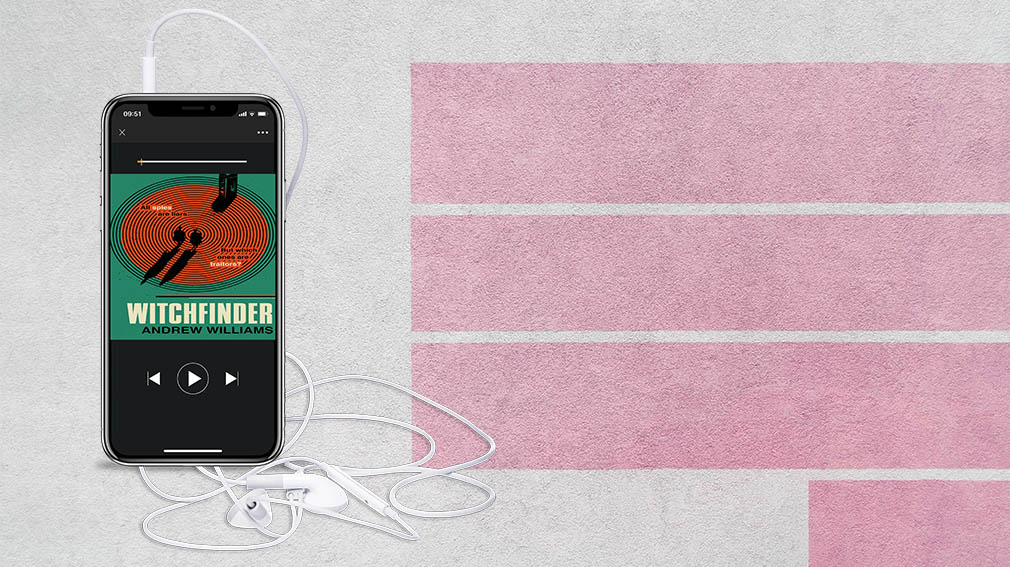 With more and more people choosing to listen to books, what can writers learn from the actors who perform their works?

On the eve of the launch of the audiobook of Witchfinder, author Andrew Williams spoke to veteran actor-reader, Richard Mitchley, about recording the book, playing the part of its narrator-hero, Harry Vaughan, and his tips for writers with an eye and an ear to the listener.

‘Richard Mitchley? The actor? He lives at the bottom of your road’, a friend said to me in my local pub before lockdown. By pure chance, providence at that, I had cast a neighbour to read the audiobook of my latest novel, Witchfinder.  More remarkable because my home is in a remote village cradled in a valley in the Black Mountains of Wales.

The publisher had a brief: find someone to play the narrator-hero of the novel, Harry Vaughan, an Oxford University-educated Welshman of about fifty, cynical – twenty  years a spy – but charming, witty, musical, and in love with his wife. Hodder came back with a number of actor-readers, but it was Richard who we were convinced sounded perfect for the part. Like Harry, he is a Welshman and a speaker of the language, with a voice tempered by an Oxford education and years of broadcasting for the BBC, Channel 4 and S4C. He has a natural gift for drawing colour and meaning from text, for painting pictures with subtle changes of tempo and expression, and after years in the business he has dozens of books to his name.

‘A first-person narrative is more challenging because you have to take on a personality and sustain that accent all the way through the book’, he says. ‘An audio book is like painting, but in water colours rather than oils. You don’t want the voices of the characters to be too vivid, it gets annoying for the listener. You don’t need huge differences to differentiate between characters.’

Witchfinder is the story of the most turbulent years in British intelligence as seen through the eyes of Harry Vaughan. It is 1963 and MI6 has been shaken to its core by the high-profile defections of Cambridge-educated spies Philby, Burgess and Maclean. Appalled by many breaches of security, the Americans have demanded a rigorous review. Harry Vaughan is brought back from Vienna to join the investigation team. The team is to hunt for traitors in MI5 and MI6 and its first target is no less a figure than the Deputy Director General of MI5, Graham Mitchell. But Vaughan isn’t impressed by the evidence or by the other members of the team. With encouragement from the Americans they seem set on turning British intelligence upside down in a search for Soviet moles, and as their investigation drags on a sense of paranoia and distrust spreads throughout the service. The only certainty is that no one is above suspicion: including Harry Vaughan.

‘First thing, Witchfinder is a very well written book’, says Mitchley (always a nice thing for an author to hear!). ‘And Harry Vaughan wasn’t too difficult to do because I could make him fairly close to me. I don’t speak with a Welsh accent normally, but I tried to put a tinge of Welsh in his voice. But apart from Harry and the American characters in the novel, there are a lot of Oxford and Cambridge educated middle aged men, so you have to fall back on changing the pitch of their voices, giving them a hoarse or nasal voice, or a stutter. You don’t need huge differences but it is nice to find something if you can. In the end it comes down to how well the book is written, and if the writer has an ear for rhythms of speech and dialect.  In some books you’re asked to read there are characters from different parts of the world who speak in exactly the same way because the author can’t hear the voices in his head. And some authors write very long sentences that don’t end up anywhere: that’s a problem.’

In Mitchley’s view the standard of book editing isn’t what it used to be – ‘pretty perfunctory’ – and that is presenting audio book readers with a challenge.  ‘You get very irritated with badly written books. You end up editing the text sometimes yourself. I’m pleased to say, not with Witchfinder. What I have enjoyed doing are the children’s books. I’ve done lots. You don’t often find many badly written children’s books. People will buy trash for themselves but they won’t buy it for their kids.  And with a kids’ book, full of fantasy characters, you can use any voice you like. No one is going to say that’s not a proper Durham accent. A well written children’s book is a joy.’

I asked Mitchely how he went about preparing to read a four-hundred-page book like Witchfinder. It takes two to three weeks, he says. First he reads the story, then he reads it again to mark the pages like a drama script, so he is clear about how he is going to differentiate between the characters.  Marking up isn’t as straightforward as it used to be because the audiobook recording companies are asking actors to read the books from a tablet. The recording is made in a studio in London or Bath, and for a four-hundred-page book like Witchfinder it will take six hours a day for three to four days. The Director reviews the output between sessions so corrections – ‘pick-ups’ – can be done at the beginning of the next recording day.

The process is now threatening to become more remote. Like many of the other specialist readers, Mitchley has taken possession of all the equipment he needs to do home recordings and has sound-proofed his study with spare pillows and duvets.

Generally, reader-performers don’t manage much more than a page without having to pause or retake. Sometimes, and for no apparent reason, a reader gets stuck on a passage of text. Mitchley says that there is at least one London recording studio with a collection of entertaining four-letter outtakes delivered by some of Britain’s finest actors. Not all audiobook readers are as carefully prepared as they should be. ‘There are stories of readers recording the entire text of a book only to discover at the end that the narrator is an American.’

The great joy of recording books is the opportunity it presents for reading, he says. ‘I very rarely listen to audiobooks  – only to check my own and generally in the car – but I prefer to read.’

Andrew Williams’s espionage thriller, Witchfinder, has been praised as ‘the most authentic spy novel ever written’. The Financial Times reviewer described the novel as a ‘captivating read’ and The Times Literary Supplement heralded its author as a worthy successor to le Carré.

Witchfinder is currently in the Audible 3-4-2 Sale. Ends 31st May.