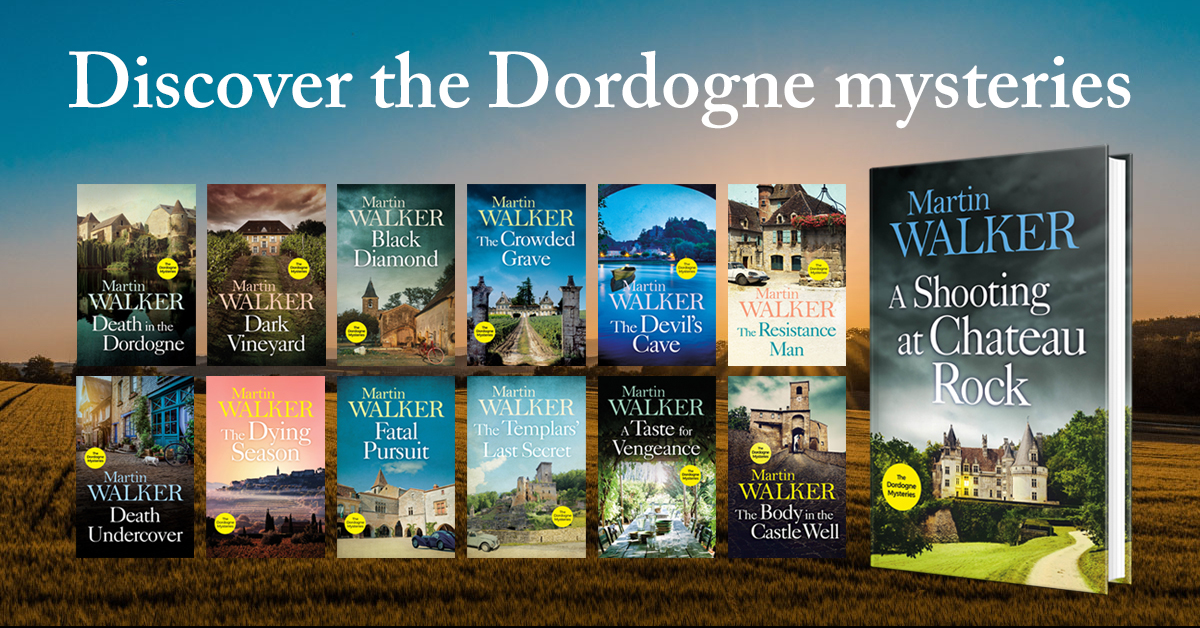 A Shooting at Chateau Rock is the latest book in the Dordogne Mysteries series by Martin Walker. Bruno, Chief of Police returns to solve another mystery which leads him to untangle a web of criminality that reaches as far as the Kremlin.

Read the start of the book here…

Two days after his father’s funeral a distraught Gaston Driant came to the Mairie of St Denis, asking to see Bruno Courrèges, the town’s chief of police. Bruno assumed that Gaston, an old acquaintance from the town tennis club, was still in shock at the dreadful nature of his father’s death. The old man, a widower, had been alone on his remote farm when he had suffered a fatal heart attack, and had not been found for several days. Patrice, the postman, liked to visit his older customers from time to time to see how they were, and he’d always found a friendly welcome at Driant’s home, along with a glass of his home-made gnôle, a notorious firewater that Bruno had learned to treat with great respect. When Patrice’s knock went unanswered, he had opened the kitchen door. Two cats had darted out and then Patrice had reeled back from the smell. Then he had thrown up when he saw what the cats, desperate for food, had done to the dead farmer. Once he’d recovered, he’d called Dr Gelletreau, whom he knew had been Driant’s physician, and waited outside in the fresh air for his arrival.
Gelletreau had come within the hour, accompanied by an ambulance. Once he had seen the body he wrote a prescription for sleeping pills for Patrice, along with an instruction for the post office to grant him three days’ leave. Given the circumstances, Gelletreau’s death certificate, citing a heart attack as the cause of Driant’s demise, had understandably gone unquestioned. And as the doctor later told Bruno, he had been treating Driant for heart trouble for the past several months and the previous month had written an authorization for a pacemaker to be installed in Driant’s chest.
Bruno was surprised when Gaston firmly refused his offer to take him down for coffee to Café Cauet saying, ‘This is going to be official, Bruno, so we’d better stay here in your office. I just came from a new notaire in Périgueux for what I understood to be the reading of Dad’s will. He’d sent a letter for me that was waiting at the funeral parlour. My sister, Claudette, was with me, she came down from Paris. We were stunned by what the notaire told us. Anyway, on the drive back here we agreed I should come and see you as an old friend. I mean, you know the law and we don’t.’
There was nothing left of his father’s estate, Gaston explained. Without telling his children, Driant had sold the farm and put all the money into an insurance policy that would pay for him to spend the rest of his days in an expensive residential home for the elderly. He was due to go there in September. The notaire said that Driant had insisted on spending one last summer on the farm he’d inherited from his father.
‘Claudette and I can’t believe that Dad didn’t tell us what he planned to do,’ Gaston went on. ‘And we don’t understand why he went to this fancy notaire in Périgueux when the whole family had always used Brosseil for wills and such. I was going to see Brosseil right after going to sit with Dad in the funeral parlour but that was when I found the letter from the notaire in Périgueux.’
Bruno nodded in understanding. Brosseil had followed in the footsteps of his father and grandfather as the local notaire in St Denis. He knew everybody in the district and everybody had always used him for wills, property sales and official paperwork. Brosseil was something of a character, fussy and prim in dress and manner and exhibiting a vanity so ridiculous that it was almost endearing, a private joke that the whole town enjoyed. But Bruno knew that his work was meticulous and that he was as honest as the day was long.
‘And this retirement home is not like Dad at all,’ Gaston went on. ‘My sister looked it up on her phone. It’s an old chateau that was turned into a hotel and now it’s a very grand home for the elderly. The fees start at four thousand euros a month That’s more than double what I earn. And because my dad’s dead, this home gets to keep all the insurance money. It all seems very fishy to Claudette and me and we agreed that I’d ask you about it.’
Bruno took down the names and addresses of the notaire, the insurance agent and the residential home and made a photocopy of the notaire’s letter to Gaston.
‘Let me look into this,’ he said. ‘How old was your dad?’
‘Seventy-four next birthday, in November. But apart from what Gelletreau said about his heart, he seemed in good shape when I saw him last, still kept up the farm. I came up here in March as usual to help him with the lambing. And that’s another thing: what’s going to happen to the sheep and ducks and chickens?’

After being laid off when the local sawmill had closed a couple of years earlier, Gaston had found a job in Bordeaux as an ambulance driver. Bruno had written him a reference, citing Gaston’s clean driving record and his years as a volunteer fireman which had brought him some qualifications in first aid. Gaston was raising two daughters who were still in secondary school so he’d probably been hoping for a decent inheritance when his father died.
‘He’d never mentioned these plans to you or Claudette?’ Bruno asked.
Gaston shook his head. ‘When we were talking over dinner at lambing time he said he wanted to stay on the farm as long as he could and then go to the retirement home here in St Denis where he knew everybody. I can’t understand what got into him.’
‘Leave it with me,’ Bruno said. ‘I’ve got your address and phone number so I’ll let you know what I find out. All I can say at this stage is that usually in cases of old people changing their wills there has to be a formal declaration signed by a doctor and a lawyer that establishes the change is being made freely and of his own volition and that he’s in full possession of his faculties. If there is no such declaration, you might have a case. But going up against a notaire and an insurance firm would probably be a very lengthy and expensive affair.’
‘Merde,’ Gaston grunted. ‘It’s always the same. One law forthe rich and another for the rest of us.’
‘In this instance, Gaston, if there is no such attestation the law could be on your side. And you know the Mayor and I will back you. Again, my condolences on your loss. I liked your dad. He was always a regular at the rugby games and at the hunting club dinners. And that gnôle he made was the best eau de vie in the valley, even if it wasn’t really legal. I hope at least he left you a few bottles.’

A Shooting at Chateau Rock is available now